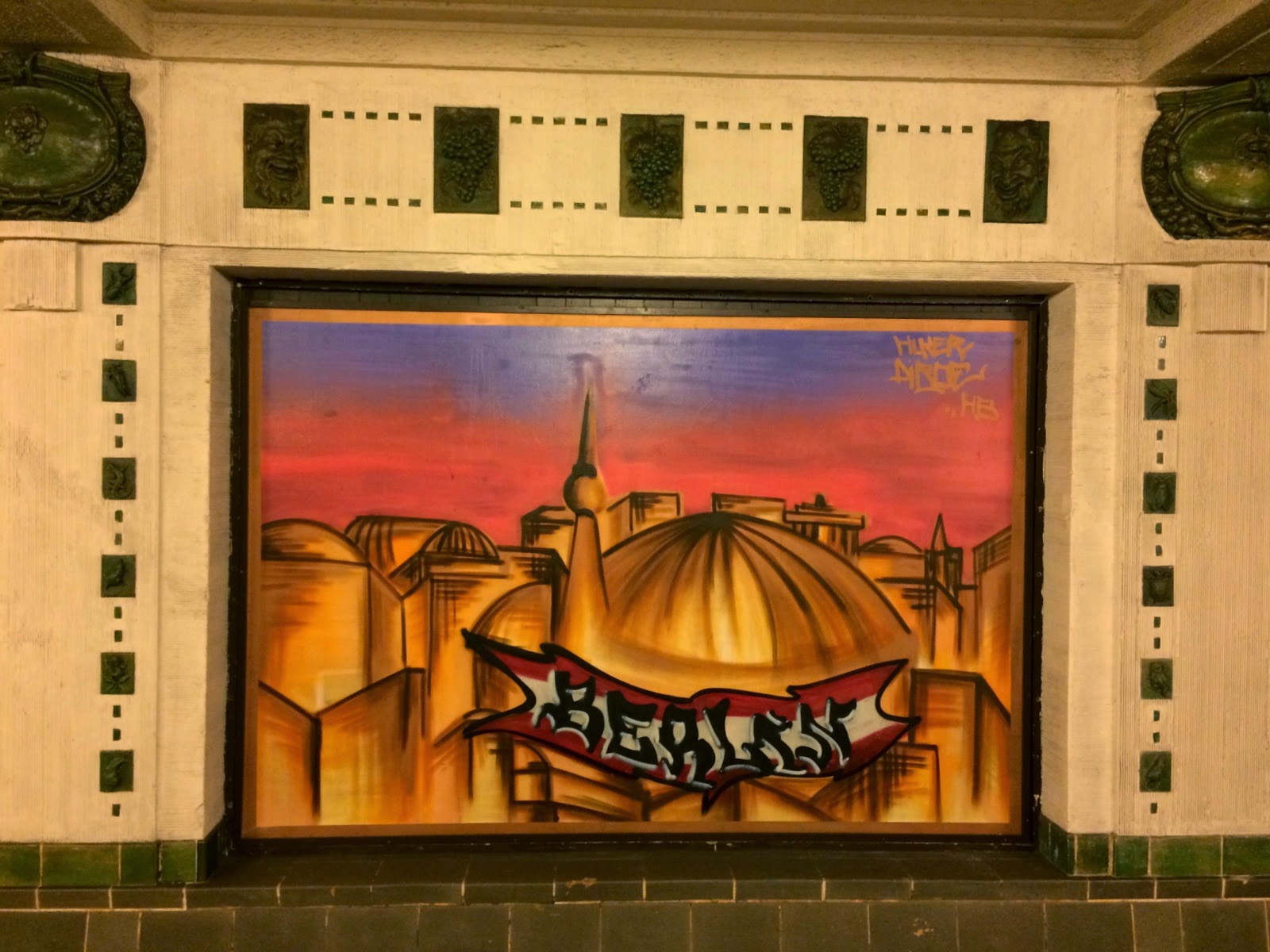 I found this rendition of the Berlin skyline in one of the subway stations on line 3 recently. Although it doesn't exactly fit the "decor" of the station, I rather like it! Hope you had a great weekend. Monday is here again and you can see more murals at Monday Mural.
Posted by Halcyon at 3/31/2014 12:00:00 AM 18 comments: 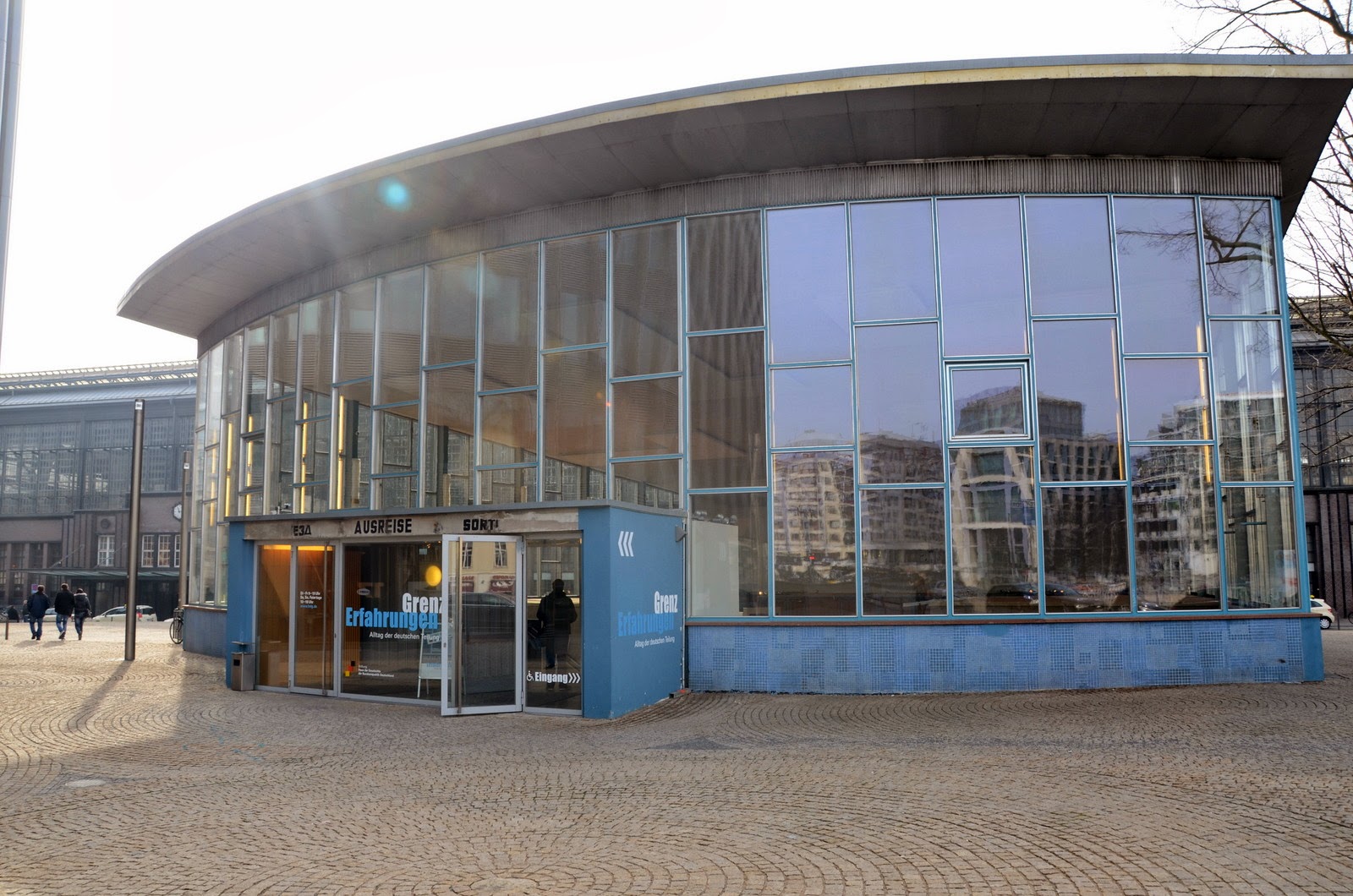 In Berlin's divided days this building was known to East Germans as the Tränenpalast or Palace of Tears. Before the wall went up, East and West Berliners could easily travel through the city via the Friedrichstraße station. In fact, many East Germans used the S-bahn to escape into the West. Once the wall went up, visitors were forced to leave the Soviet Sector through this departure hall which became the scene of many sad farewells. Today it's a museum where East Germans have given first-hand accounts of what it was like to use this departure hall or how they escaped. It is really interesting and well-done and the most amazing part is that it's free!

I am glad Friday is finally here! I hope you've got something exciting planned for the weekend. I am going to see a classical music concert at the Franzosicher Dom and I'll definitely be bringing my camera! Be sure to visit Weekend Reflections to see more reflections from around the world.
Posted by Halcyon at 3/28/2014 12:00:00 AM 19 comments: 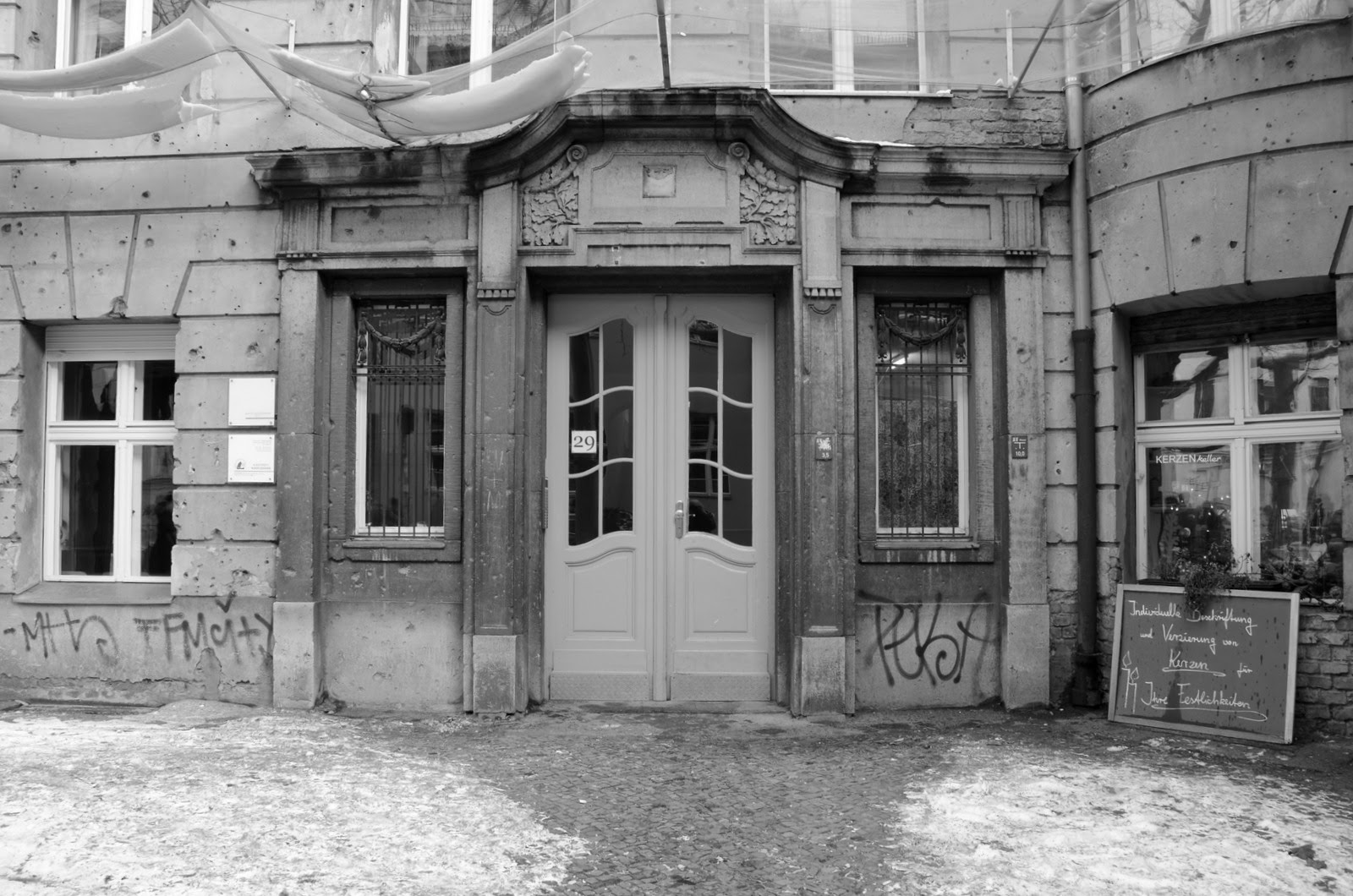 Berlin is full of beautiful entrances and doorways, I can hardly photograph them all! I found this one particularly appealing with the shape of the glass in the doors and the art deco details above. It's only sad that it has been attacked by taggers, but the more I explore Berlin, the more I am liking the decay!
Posted by Halcyon at 3/27/2014 12:00:00 AM 16 comments: 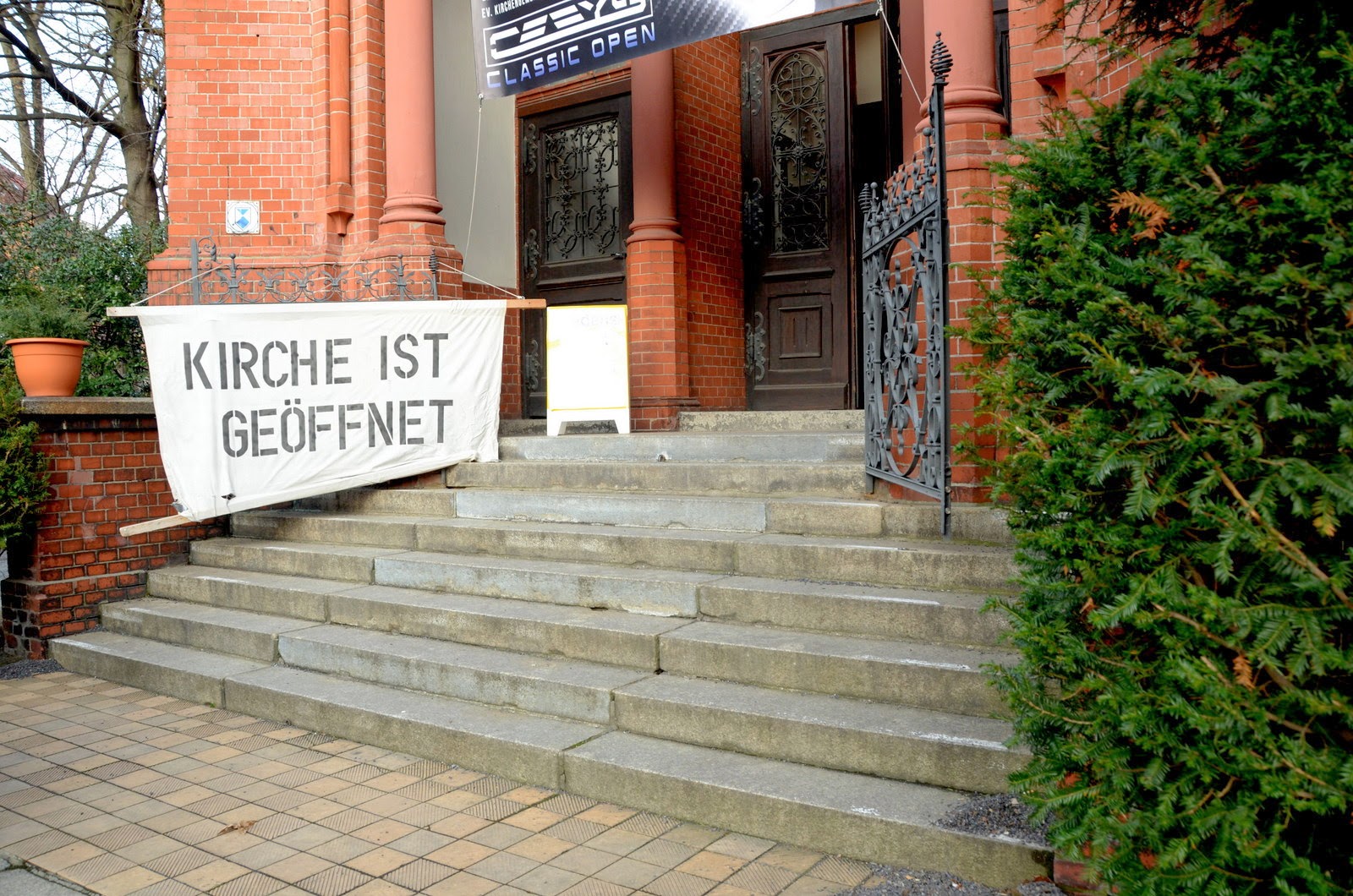 I found this sign a little odd - it means the church is open. Even taken literally, I wouldn't think you would need a sign to tell people the church is open, but perhaps it is meant in a more metaphorical sense? Or maybe things are just different here!

In any case, I did take advantage of the offer to come inside the Gethsemanekirche and found it very much worth my time. The interior  is quite simple, but the really interesting part of the church is that it played a very important role in the fall of the Berlin wall. Although religion was generally frowned upon in the former East, it was to some degree tolerated. In the late 1980s, young people began organizing prayer services and rallies at this church. Sometimes so many people came to pray that they were overflowing into the street. I guess the power of prayer really did work in this case as the wall eventually came down. There is a small exhibit inside the church detailing its role in the events of Autumn 1989 which is definitely worth a visit if you're in the area. Until then, you can see more signs at Signs, Signs.
Posted by Halcyon at 3/26/2014 12:00:00 AM 17 comments:

All the way from Italy 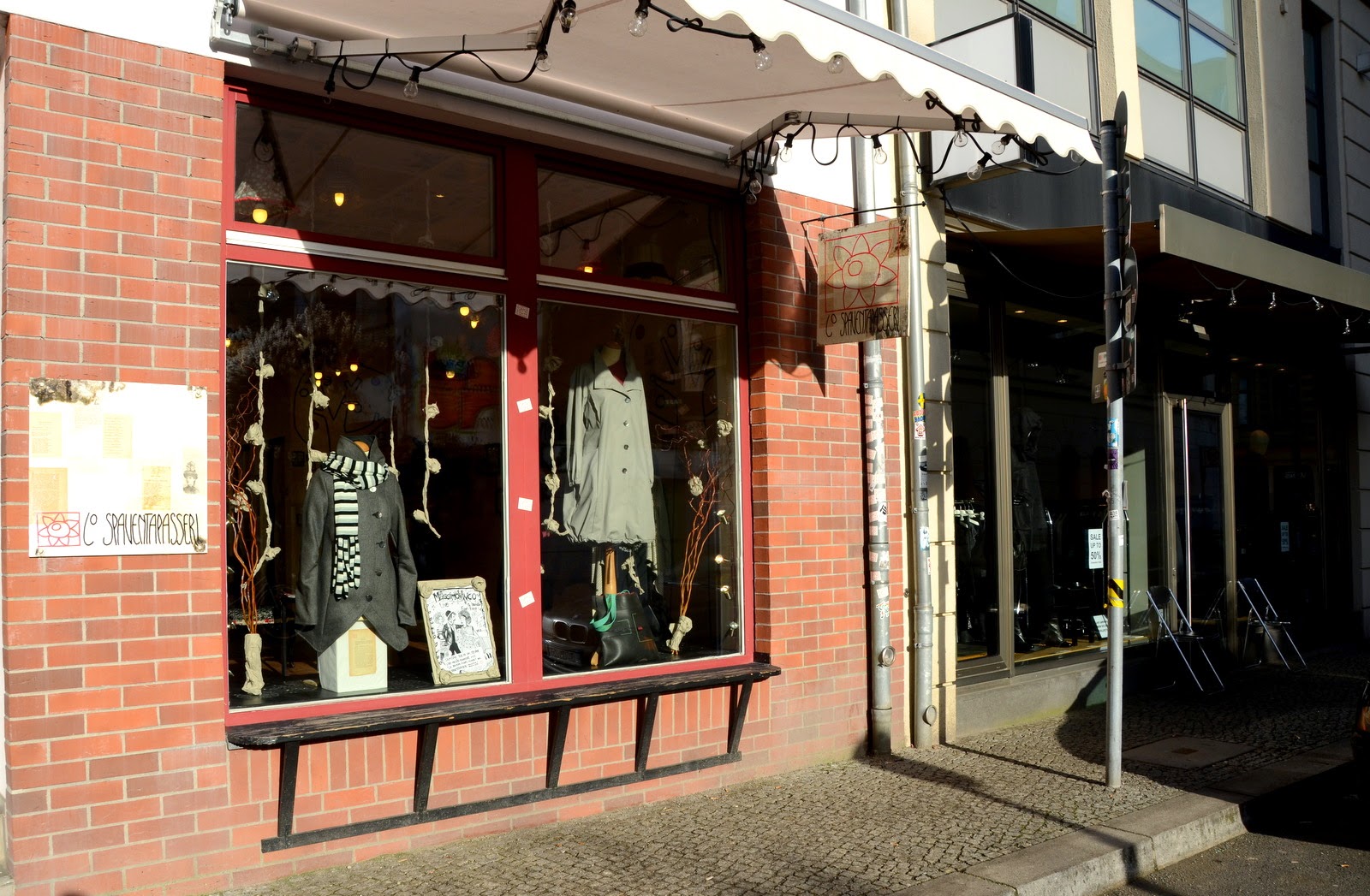 I was mainly attracted to this shop because of the integrated bench outside the show window, but after reading Lo Spaventapasserai's website, I'm even more interested! The clothing sold in this boutique is designed and produced in Italy - something pretty rare in our "made in China" days. I think I'll have to make a trip back and look inside. I think I could use a little something new. For more red, visit Ruby Tuesday.
Posted by Halcyon at 3/25/2014 12:00:00 AM 18 comments: 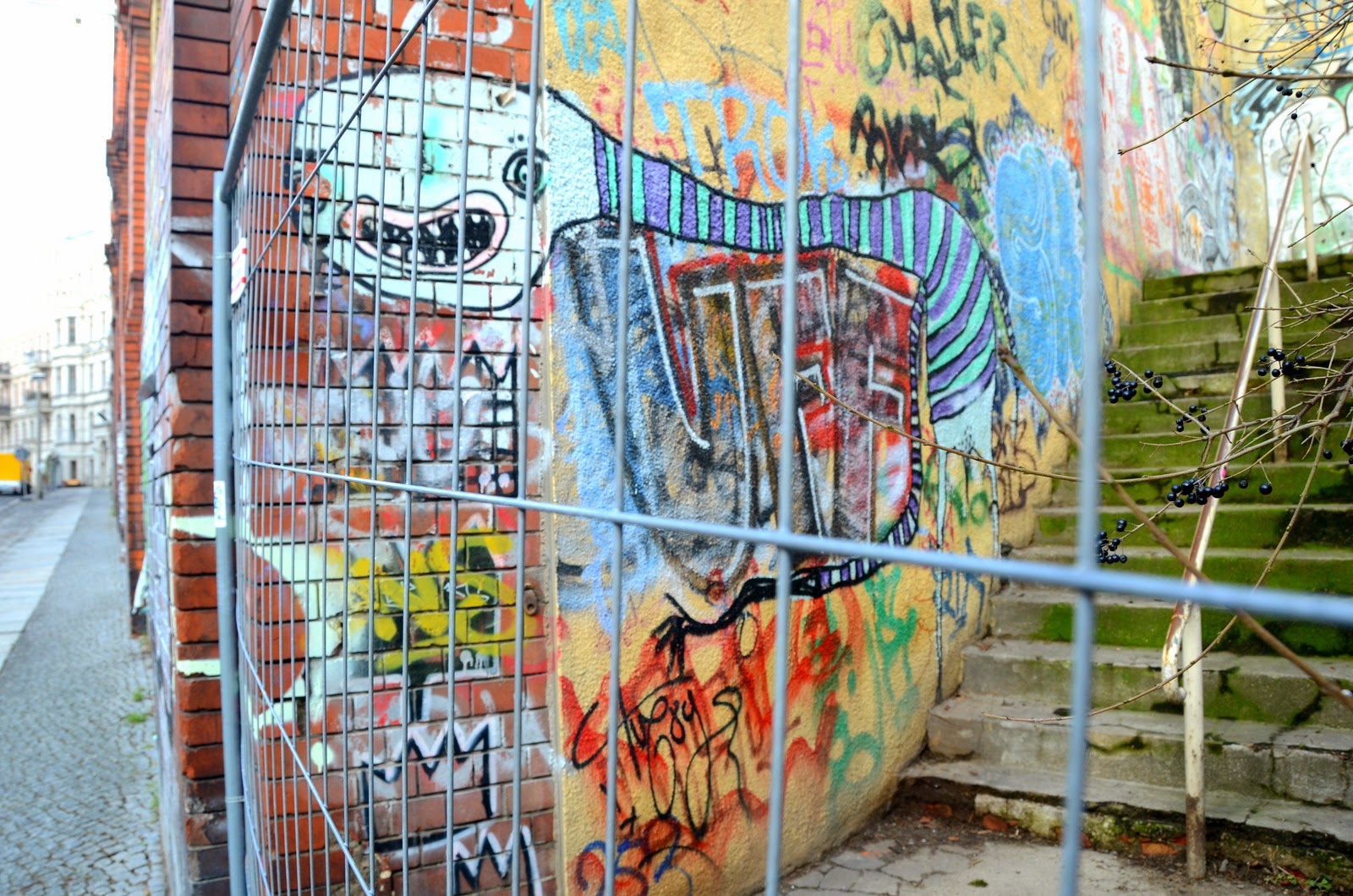 I found this stripey snake on Saarbrücker Straße in Mitte. It's not the nicest piece of wall art I've ever seen, but something about the childlike style appeals to me. I have a feeling this barrier has been put up because the building has been acquired by new owners. It probably won't be long until renovations begin and more apartments go up. I wonder if anyone will miss this little snake then?

Head in the clouds 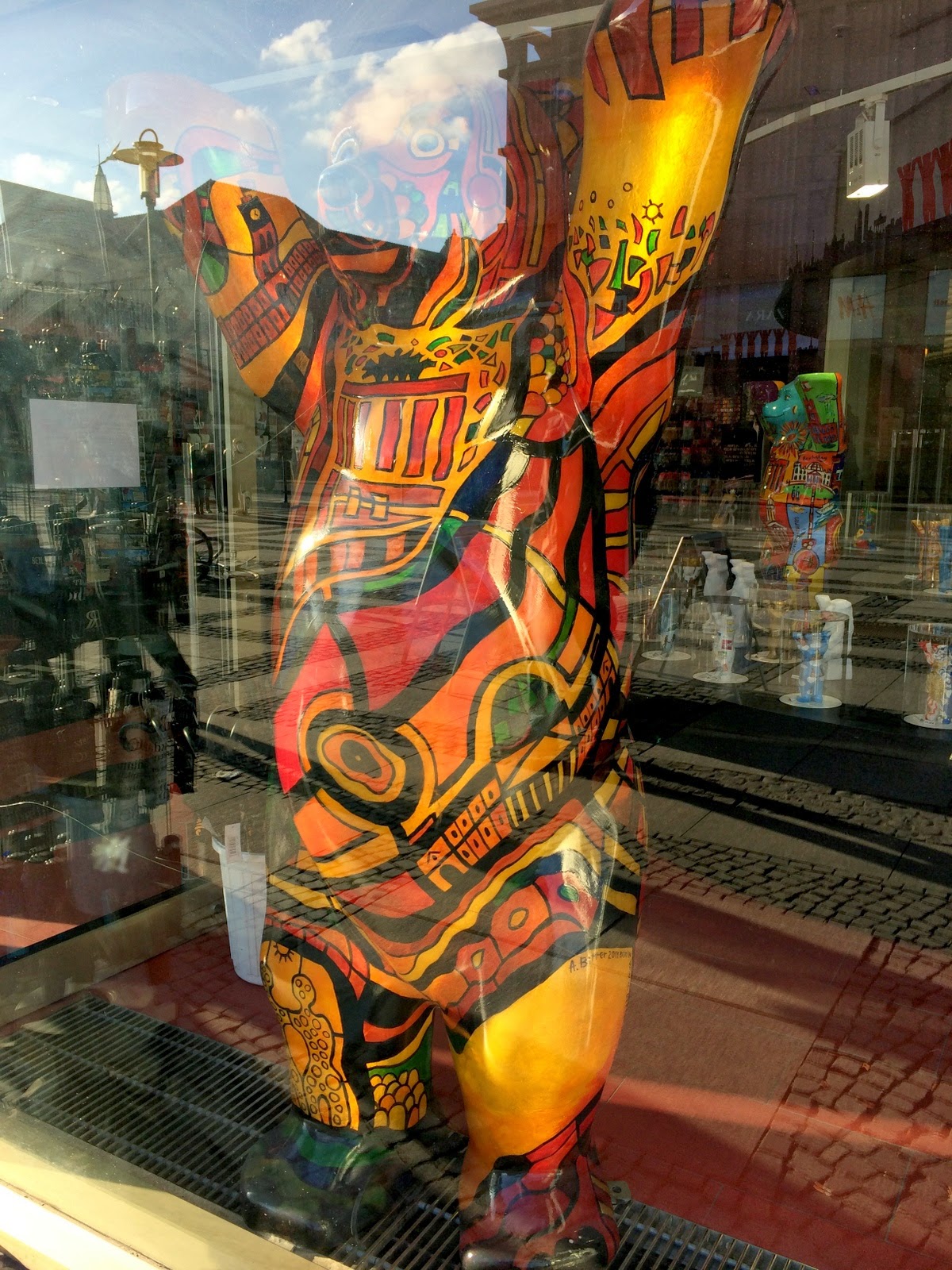 I was actually trying to diminish the reflection in this shot as much as possible, but now that I see it on the computer, I rather like it. It looks like this bright bear has his head in the clouds! For more reflections, head over to Weekend Reflections. 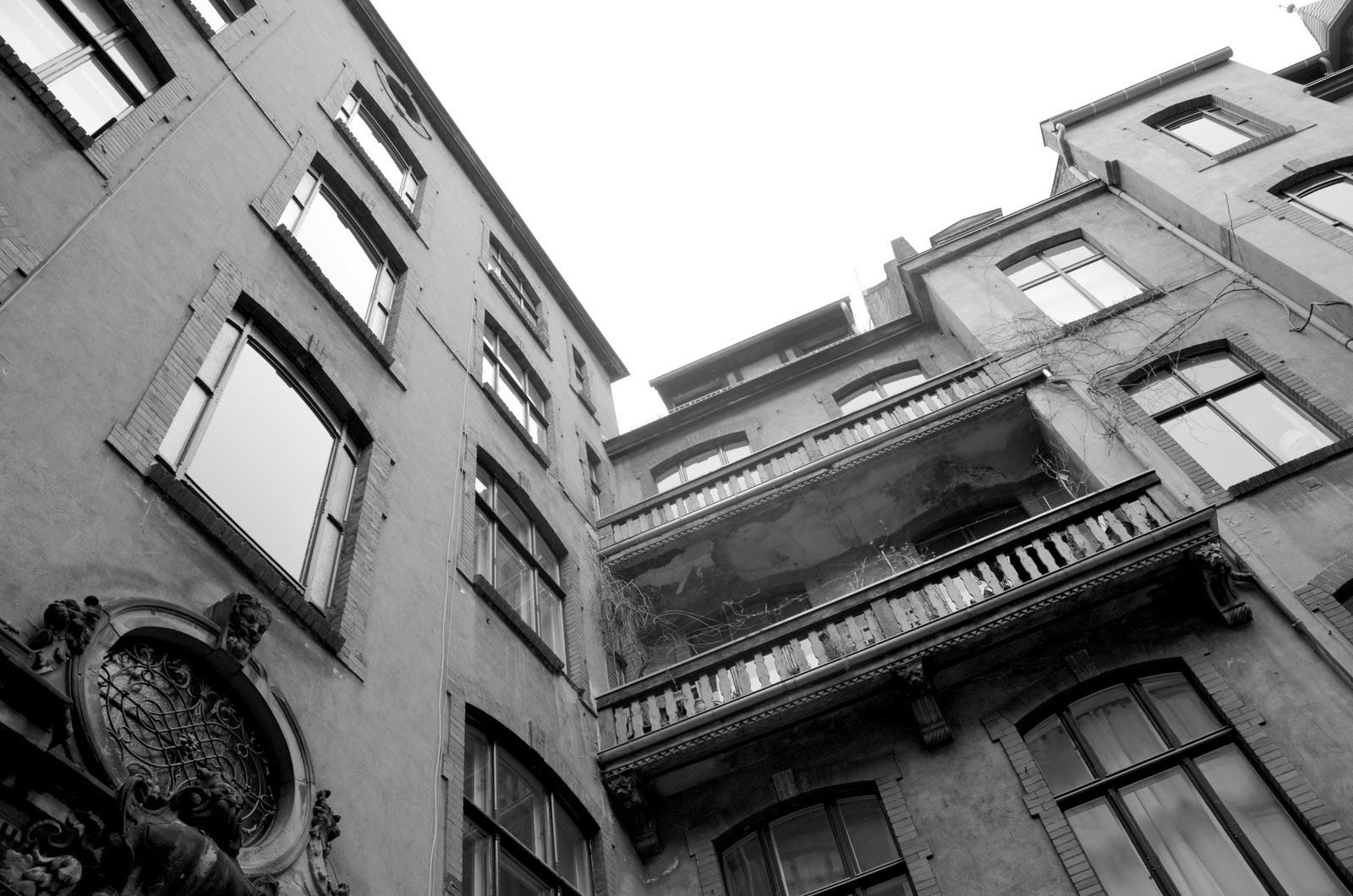 Although most buildings in both east and west Berlin have been renovated, you sometimes run across one that hasn't yet been modernized. I find the decay has a certain beauty, but with property prices on the rise here in Berlin, I'm sure it won't be long before this building gets a make-over. This is a prime spot near the Hackeschermarkt and I'm sure the owner will get a pretty penny for it!
Posted by Halcyon at 3/20/2014 12:00:00 AM 12 comments: 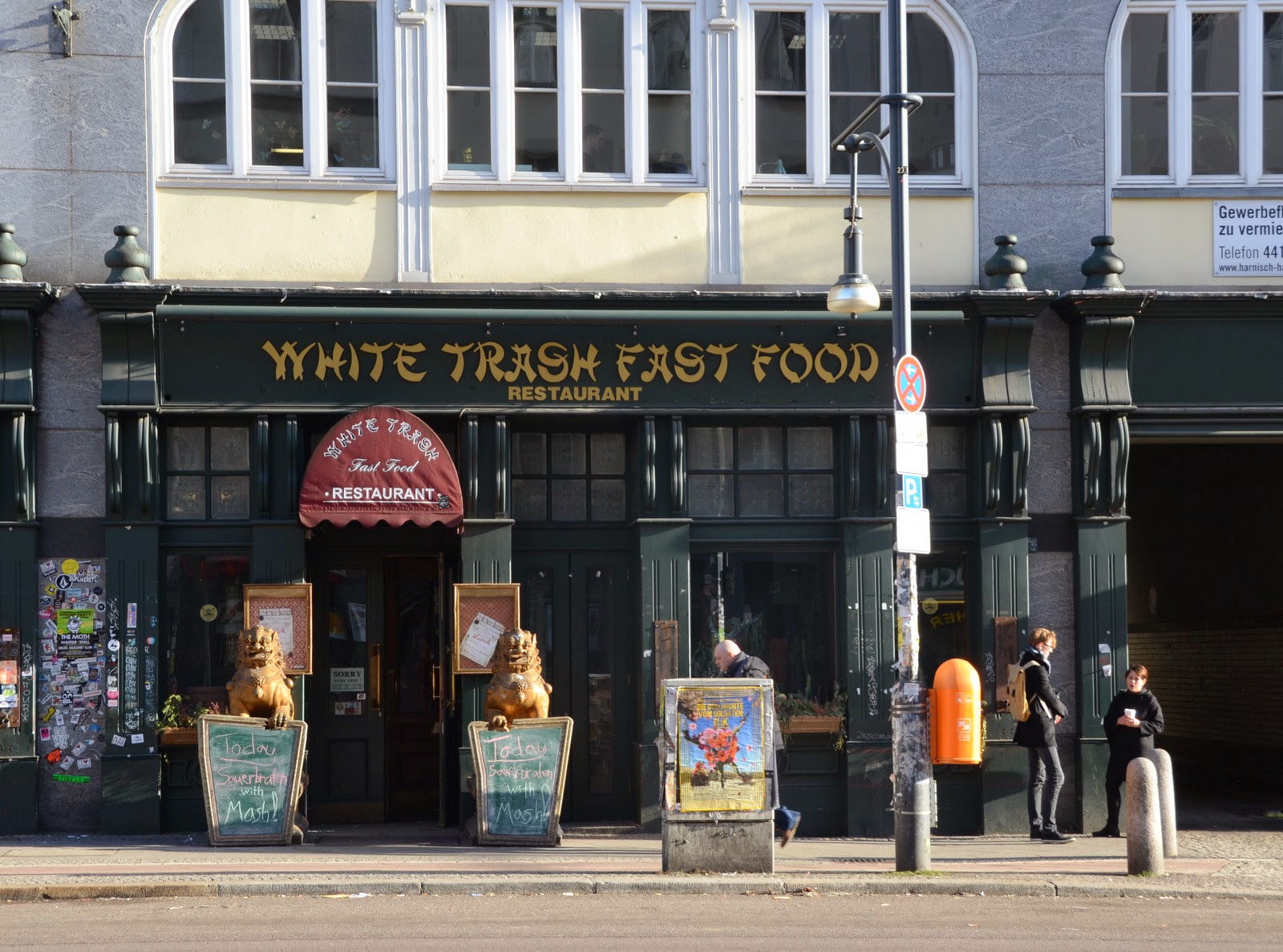 I don't find this name for a restaurant particularly appealing, but I think I'll have to check it out one of these days out of sheer curiosity! For more signs, visit Signs, Signs.
Posted by Halcyon at 3/19/2014 12:00:00 AM 22 comments: 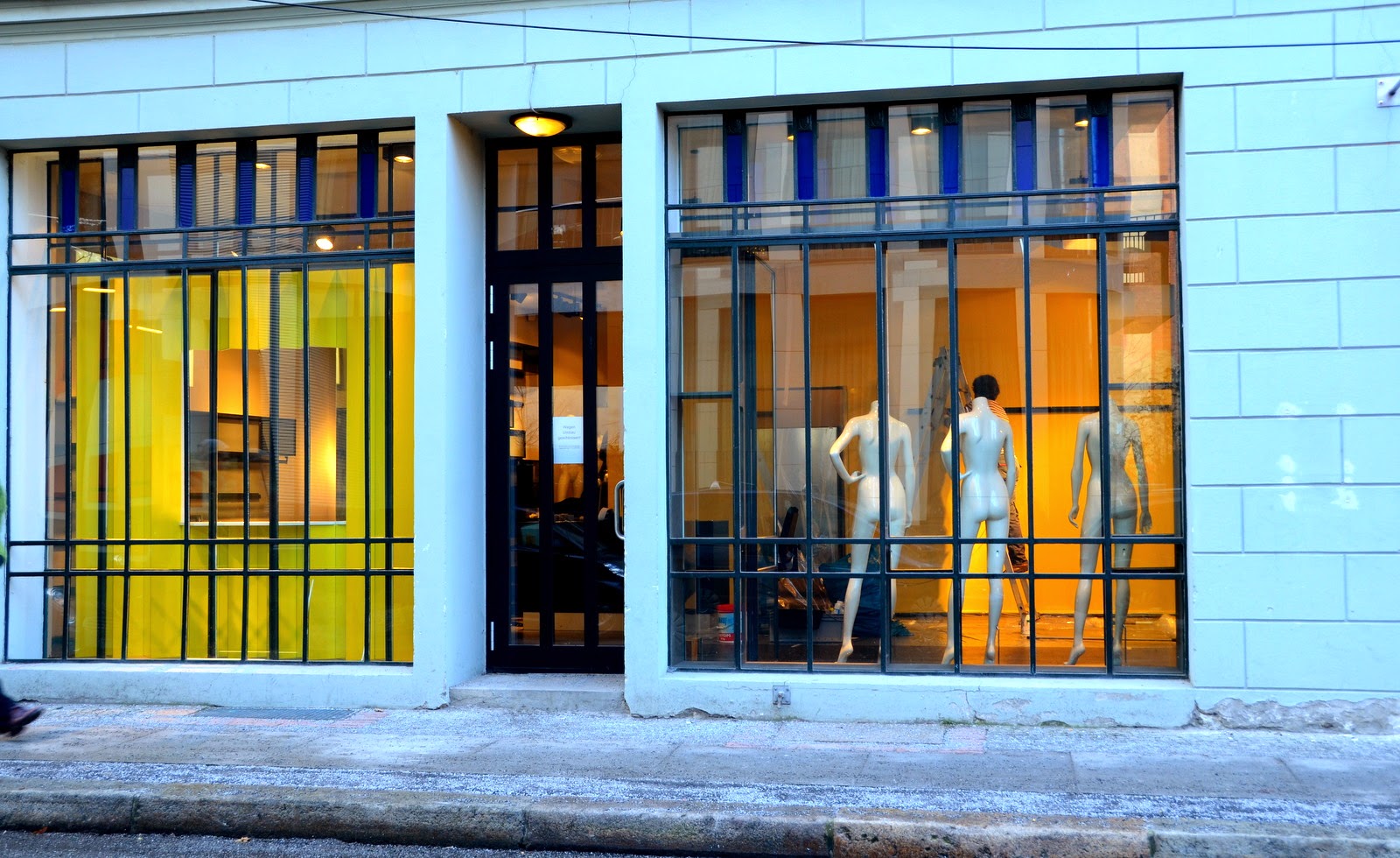 I found this work in progress in one of the many smaller streets around Hackescher Markt. The sassily posed mannequins made me laugh and I couldn't resist stopping for a shot. Hope you find it amusing too!
Posted by Halcyon at 3/18/2014 12:00:00 AM 13 comments: 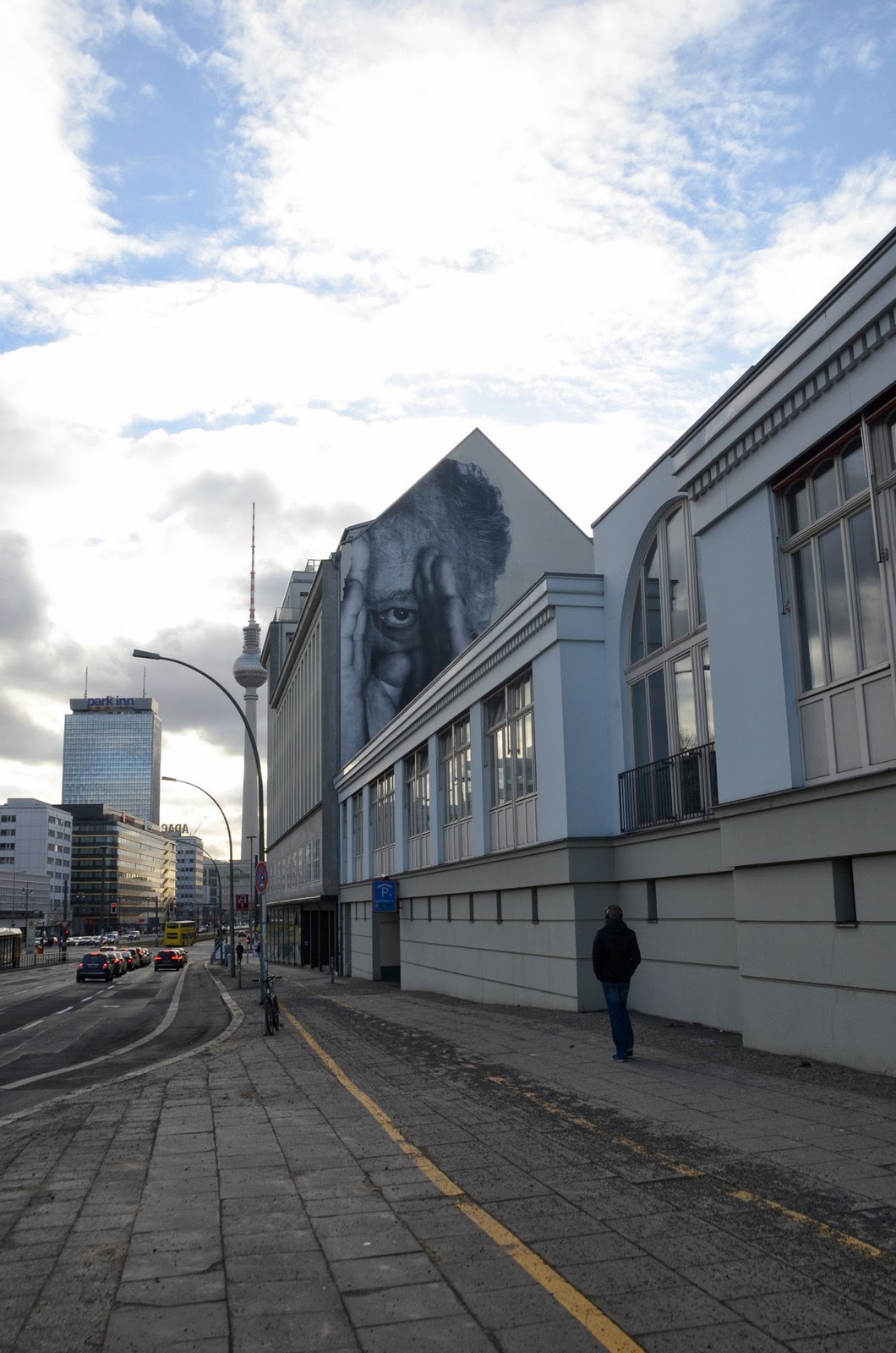 I'm not sure if this mural is a representation of a real person, but I found it very striking. I also like the way the Telespargel is sticking out in the background. Hope you had a wonderful weekend. For more murals, head to Mural Monday.

ETA: The name of this mural is The Wrinkles of the City. It was painted by the artist known as JR. More information can be found here.

Looking up (as always) 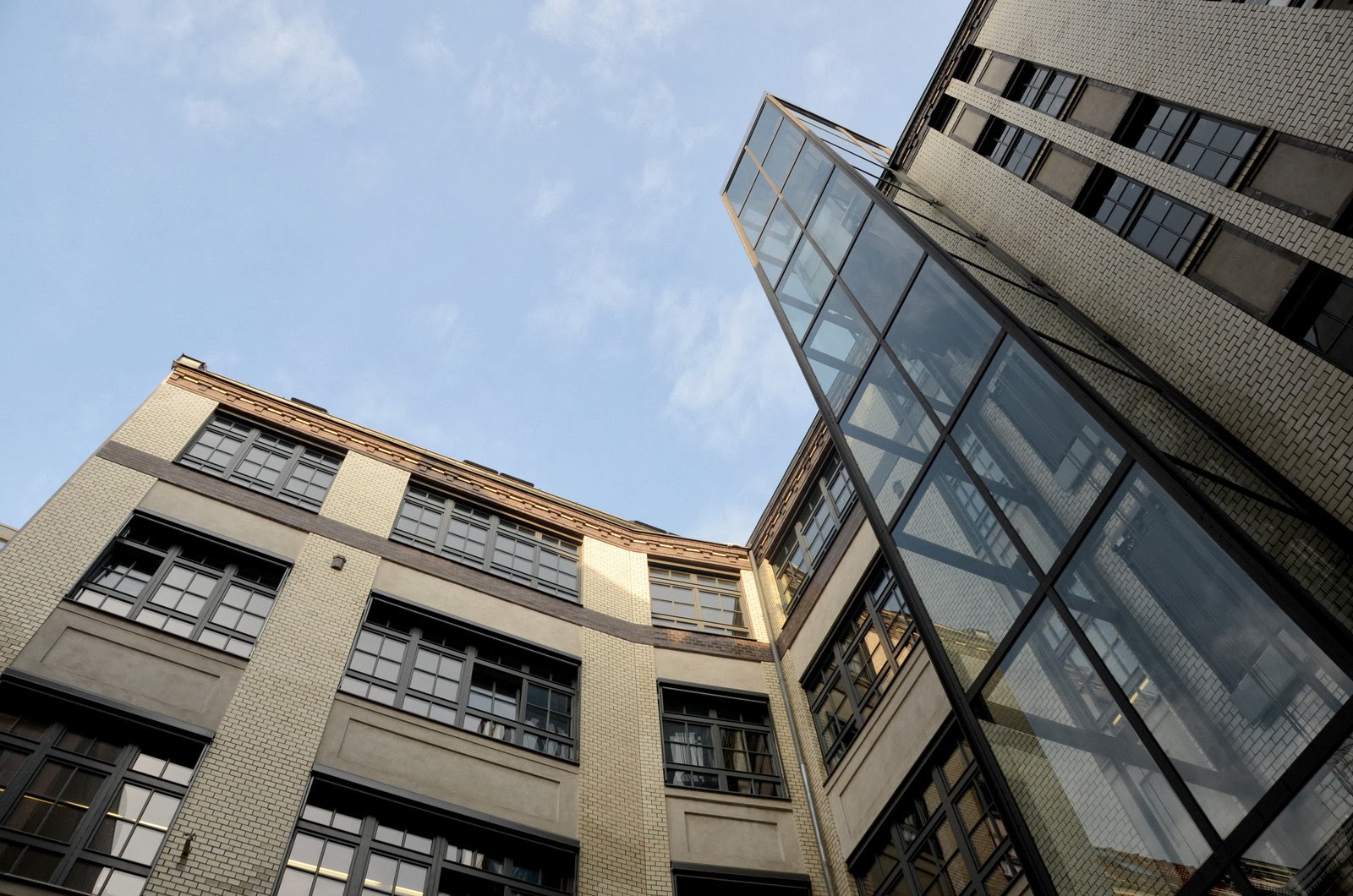 The skies are finally blue here in Berlin! This is a look up at the elevator in the courtyard of the Goethe Institute. Quite a lot of old buildings here in Berlin have an elevator on the outside as many of them can't be integrated on the inside. I think it's quite nice though! And you get a view into the neighboring courtyards when you ride up to the fifth floor.

The weekend is finally here! Do you have any big plans? I'm not sure what I'm getting up to yet, but I will definitely be enjoying the fine weather. For more skies from around the world, visit Skywatch.
Posted by Halcyon at 3/14/2014 12:00:00 AM 15 comments: 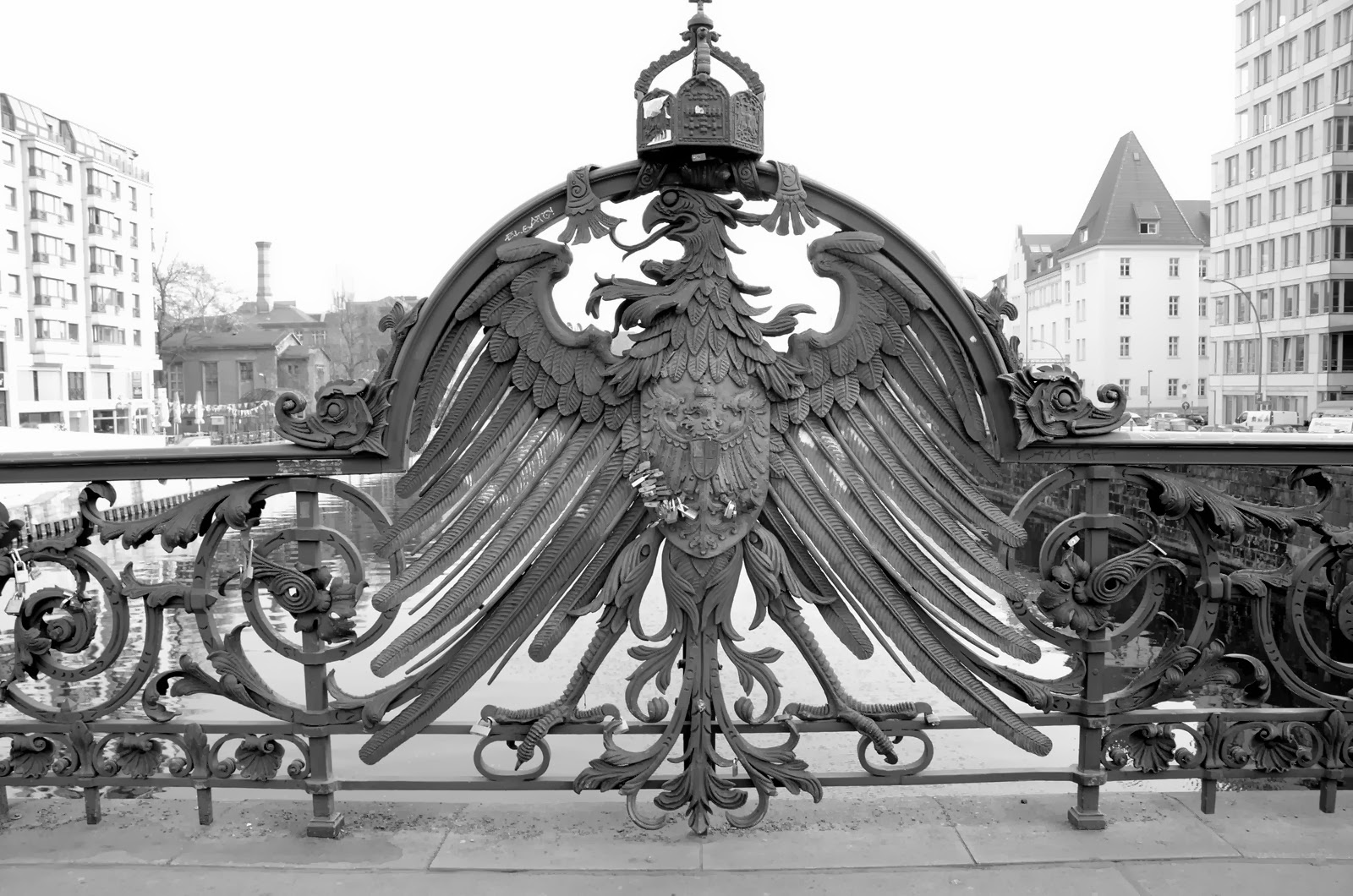 This ornate eagle can be found on the Weidendammbrucke not far from the Friederichstrasse U- and S-Bahn station. I was not the only person vying for a shot of this impressive bird, but luckily I was finally able to get this shot with no people in my way. Hope you enjoy!
Posted by Halcyon at 3/13/2014 06:26:00 AM 18 comments: 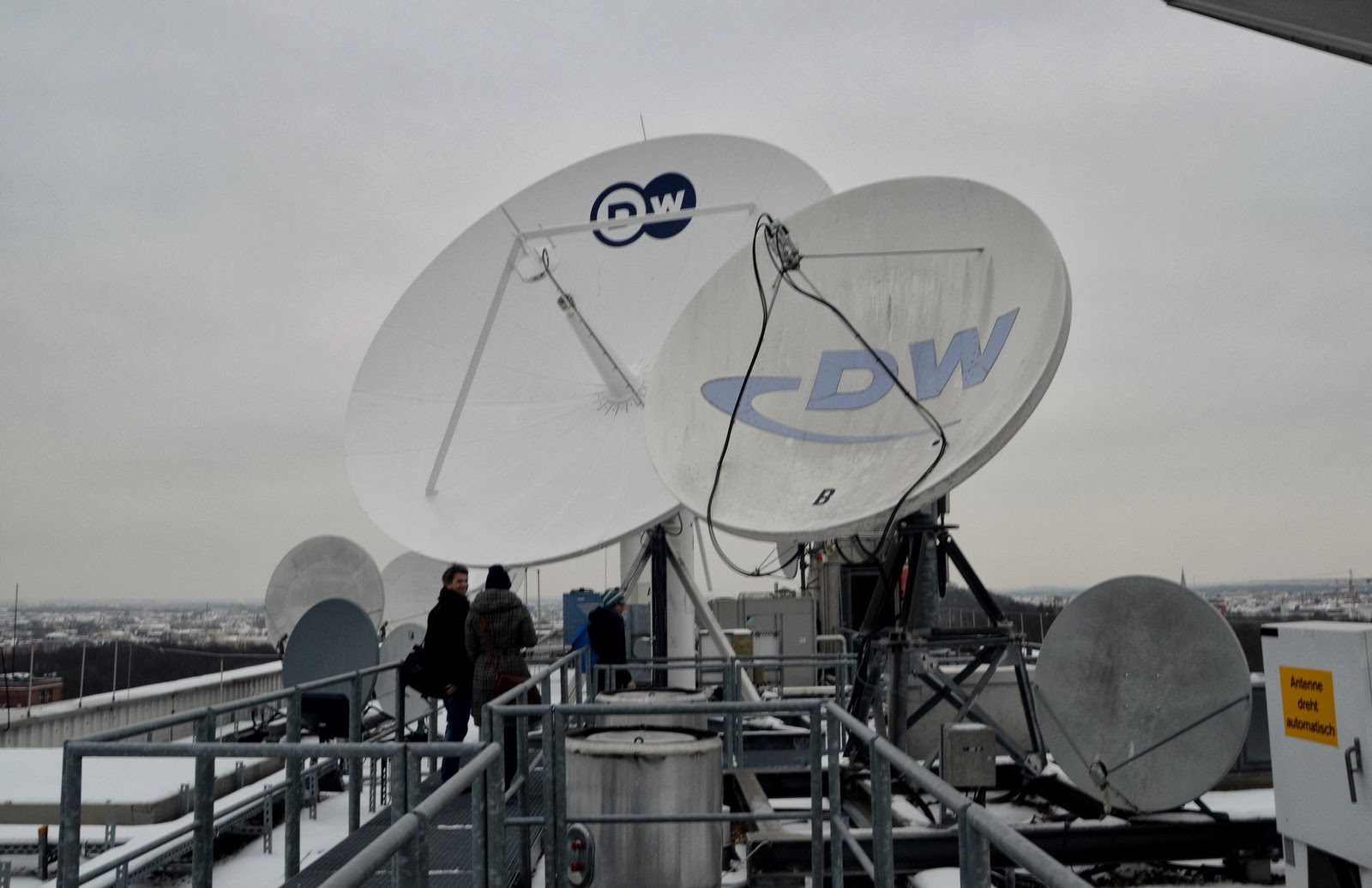 It was a cold day back in January when I took the Deutsche Welle tour. It was definitely exciting to see the inner workings of a braodcast studio, but I think my favorite part of the tour was the trip up to the top of the building. 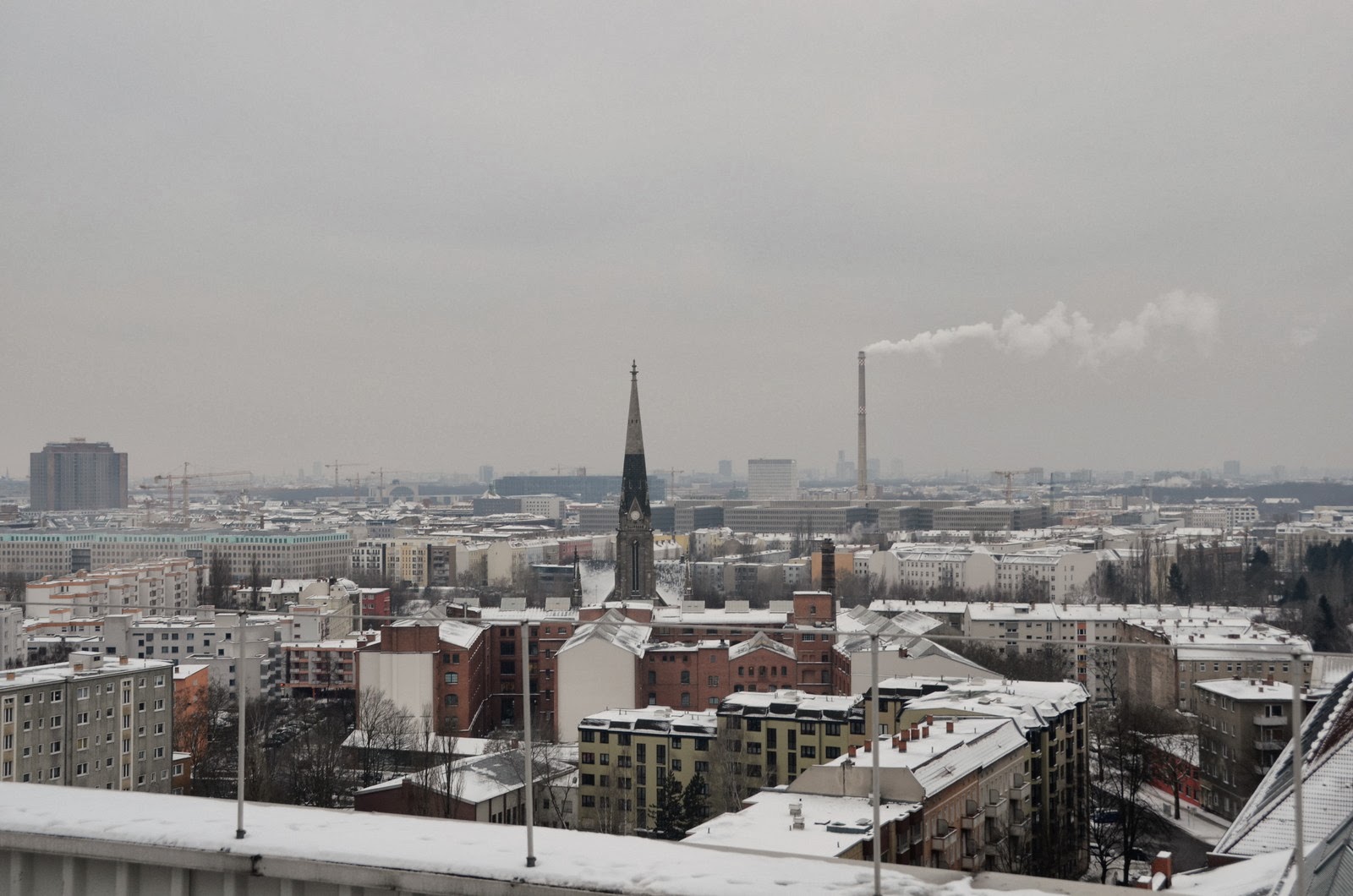 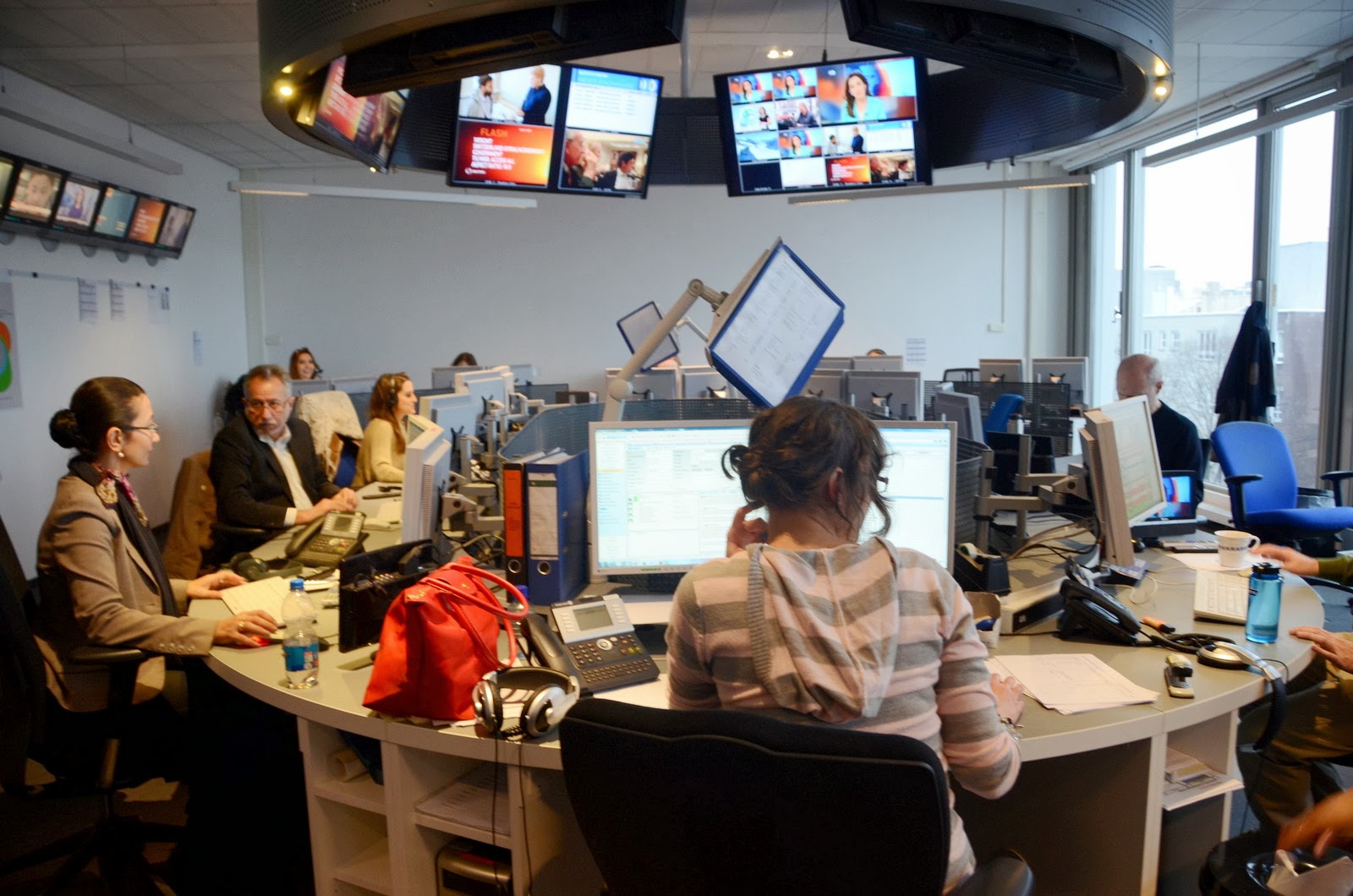 Here's another look behind the scenes at Deutsche Welle. The people working in the Redaction are hard at work putting stories together and coming up with new ideas for reports. If you're ever in Berlin and have some time, I highly recommend the studio tour!
Posted by Halcyon at 3/11/2014 12:00:00 AM 14 comments: 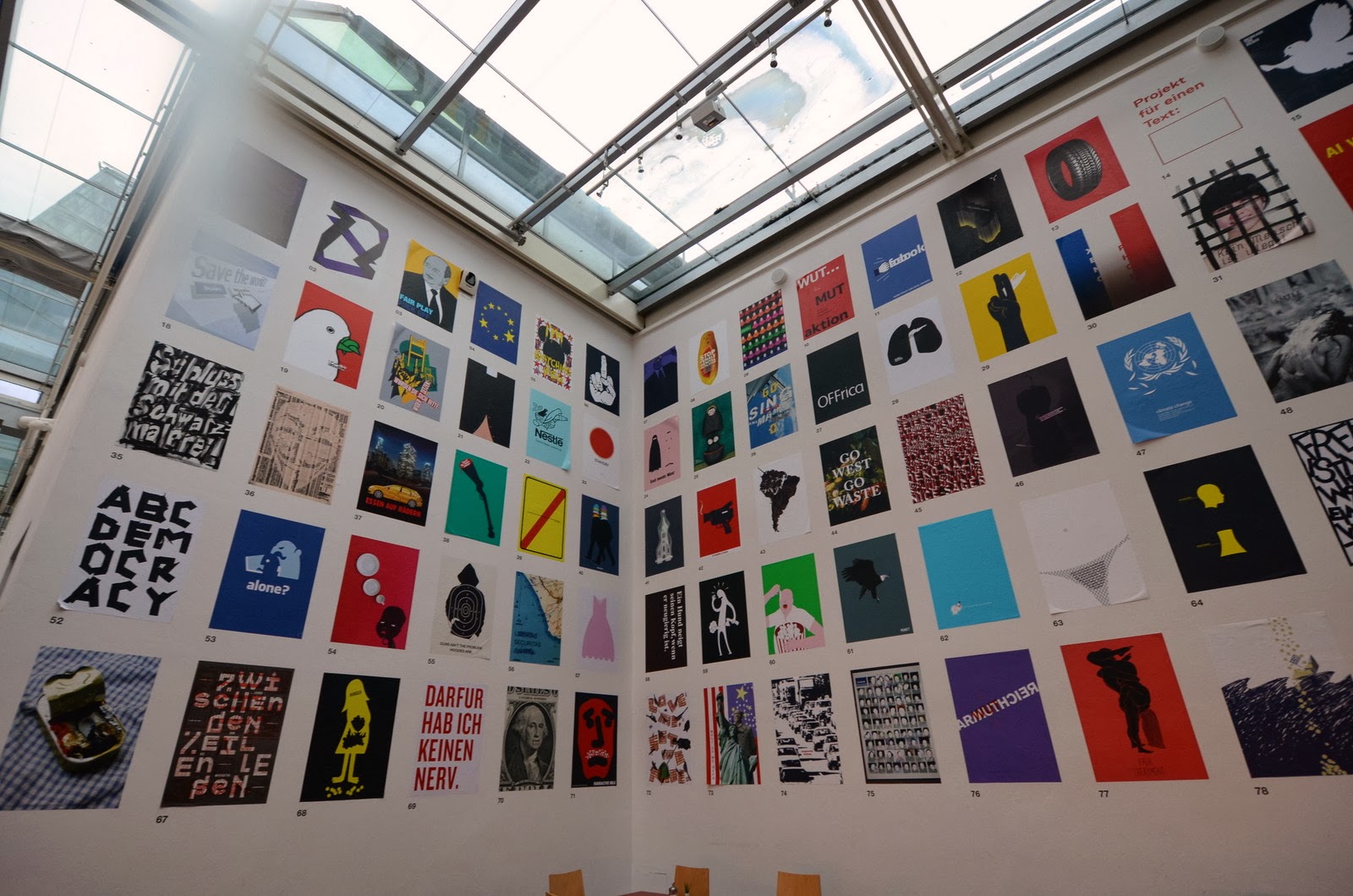 If you take a stroll through the Akademie der Künste on Pariser Platz here in Berlin, you might notice this wonderful wall. Although it's technically outside the gift shop, it shows the different posters that are available for purchase. I thought it was quite a fun way to display all the different works and definitely added color to the otherwise very white and sterile walls. For more murals, head to Monday Mural.
Posted by Halcyon at 3/10/2014 12:00:00 AM 15 comments: 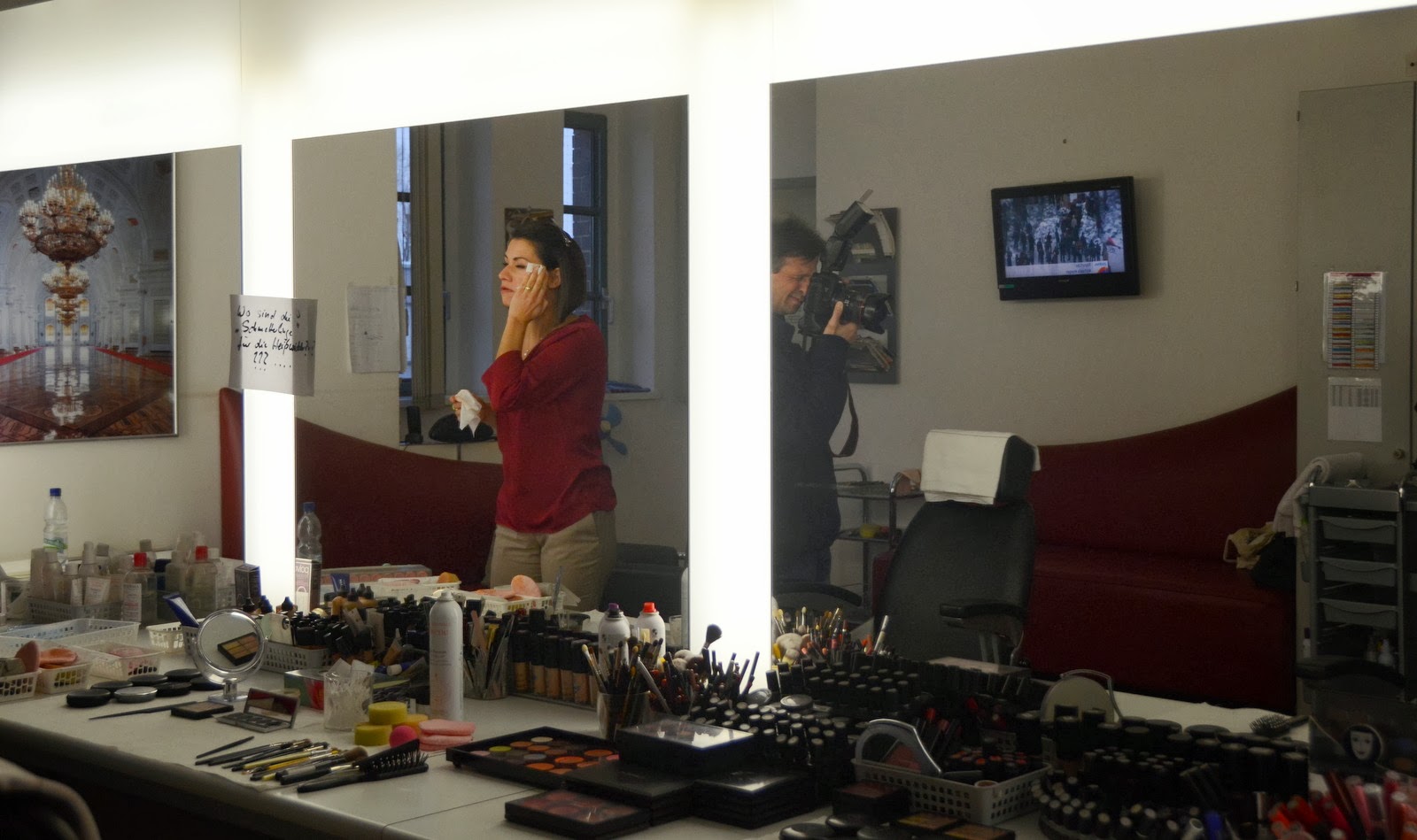 I recently took a tour of the Deutsche Welle studios here in Berlin. It was super interesting and we really got to see the "backstage" areas, like here where the presenters prepare themselves. Luckily for me, there happened to be someone using the make-up mirror, so I got a nice reflection. Hope you enjoy! For more reflections, take a look at Weekend Reflections.
Posted by Halcyon at 3/07/2014 12:00:00 AM 16 comments: 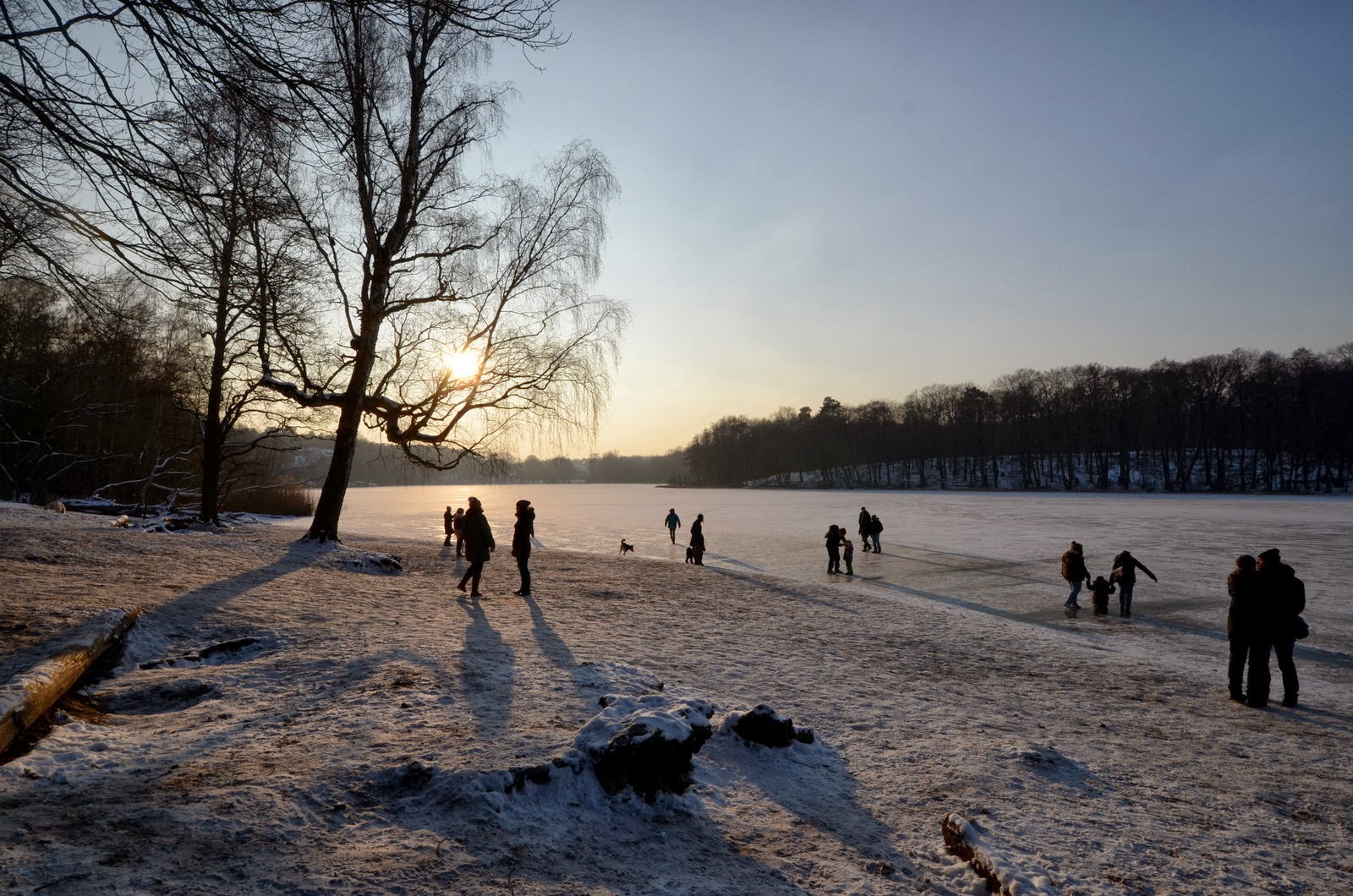 Here's a look back at the few cold days we had here in January. It was cold enough that the Grunewaldsee was frozen over for a few days. A few people ventured out more towards the middle of the lake, but most stayed on the edges where it was safer. It's always fun to go walking on the lakes in the winter, but I'm glad the season wasn't so harsh this year. A couple of weeks of cold was enough for me, although I have to admit the snow was pretty, especially under such beautiful light.
Posted by Halcyon at 3/06/2014 12:00:00 AM 11 comments: 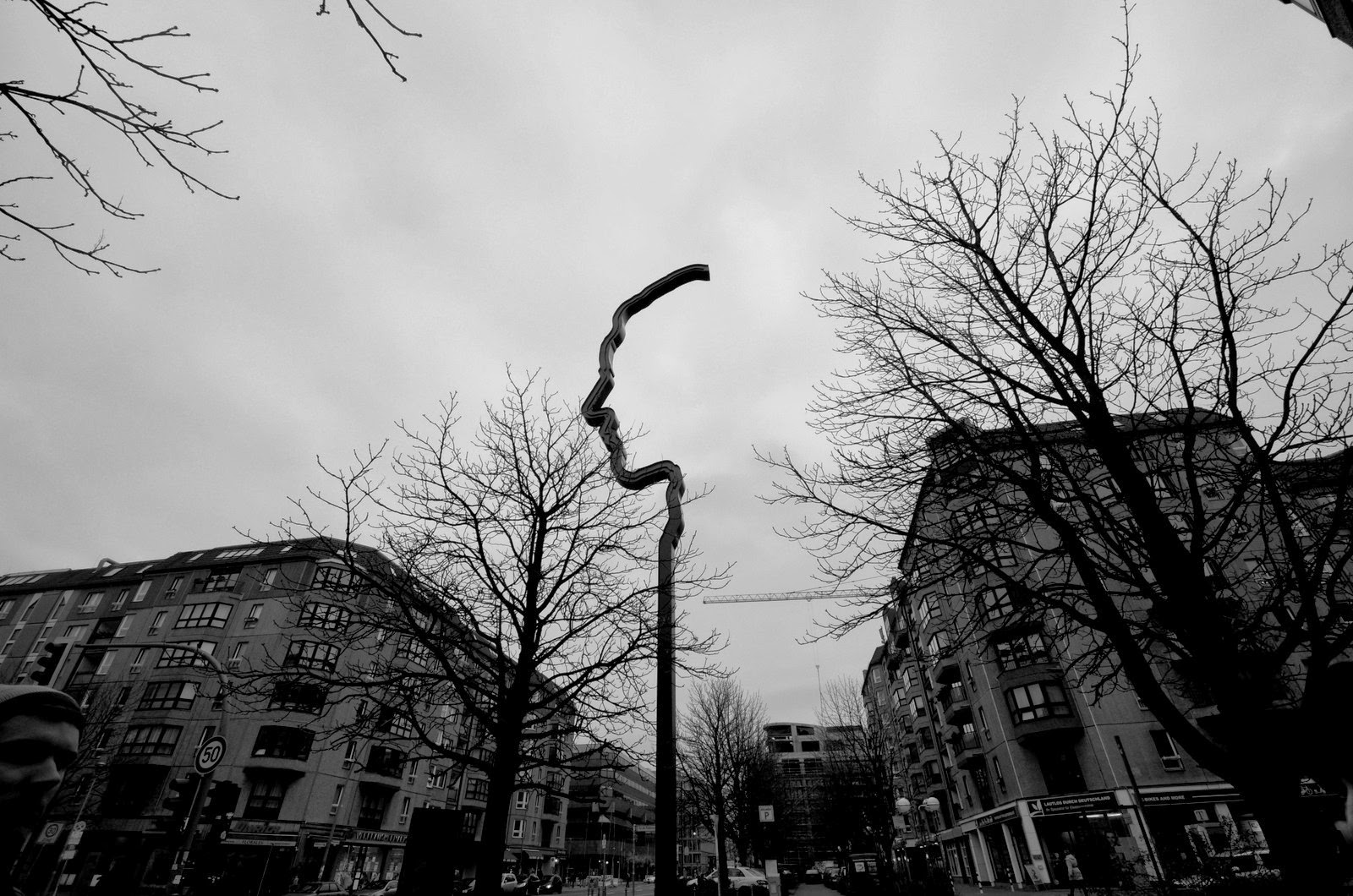 Almost everyone has heard of Claus von Stauffenberg thanks to Tom Cruise's famous movie The Valkyrie. But did you know there was a man who tried to assassinate Hitler in 1939, years before Stauffenberg's attempt? His name was Johann Georg Elser and this silhouette is a memorial to him. I think the simplicity of this piece makes it even more powerful (it also looks great in black and white!). If only he had succeeded in his attempt, things might have turned out very differently. I guess we'll never know, but his story is an interesting one - click on his name above to read more. You can find more signs at Signs, Signs.
Posted by Halcyon at 3/05/2014 12:00:00 AM 13 comments: 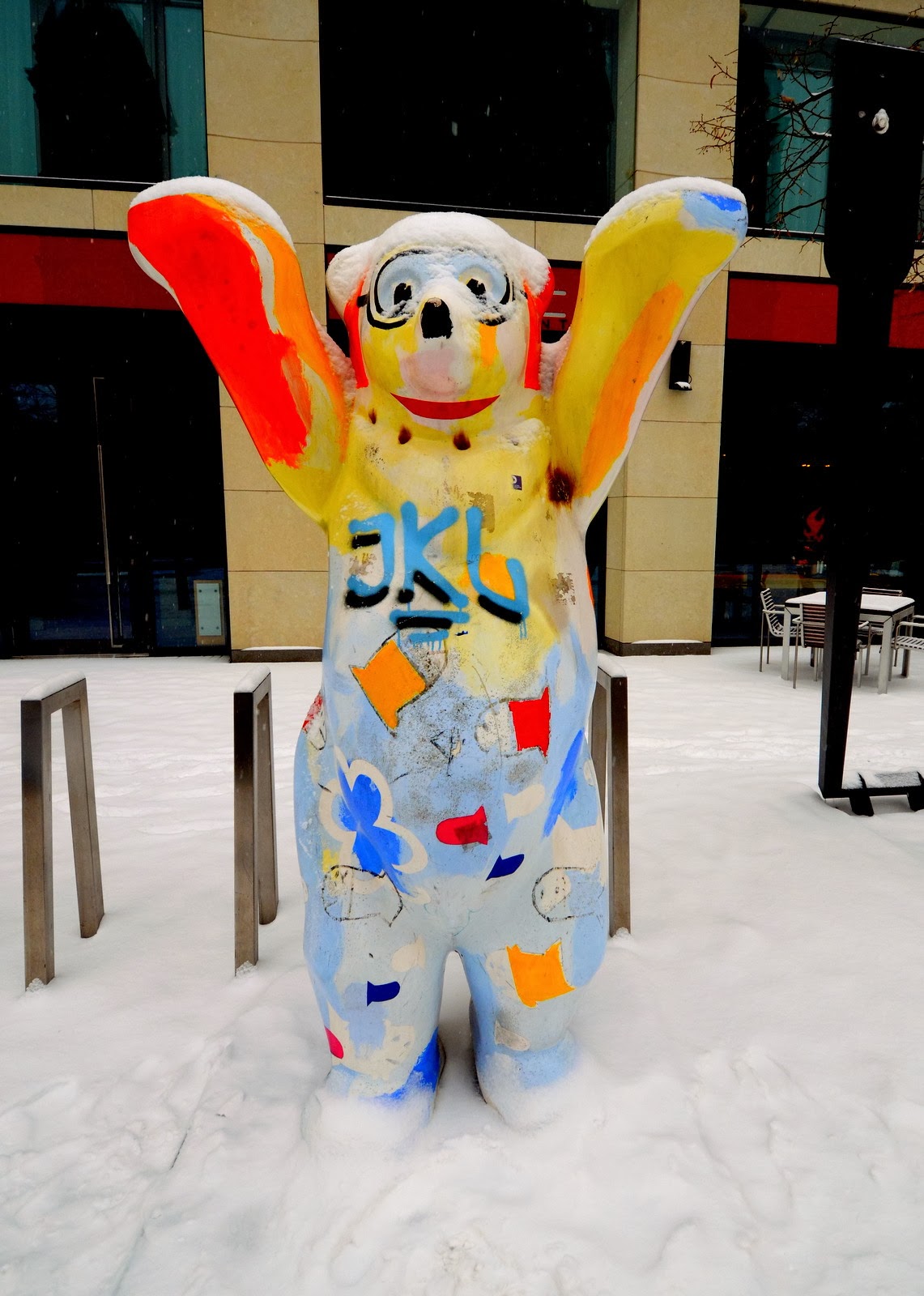 The Berlin Buddy Bears are all over the city! They are lifesize fiberglass bears that have been sponsored by a company and are often painted/decorated by an artist of note. I found this particular model outside a restaurant near the Berliner Dom when I visited at the end of January. I'm not sure about his origins or history, but I thought the glasses were a cute idea. I'll post some more of the bears I've seen around town in the coming weeks. It's always fun to keep an eye out for them! 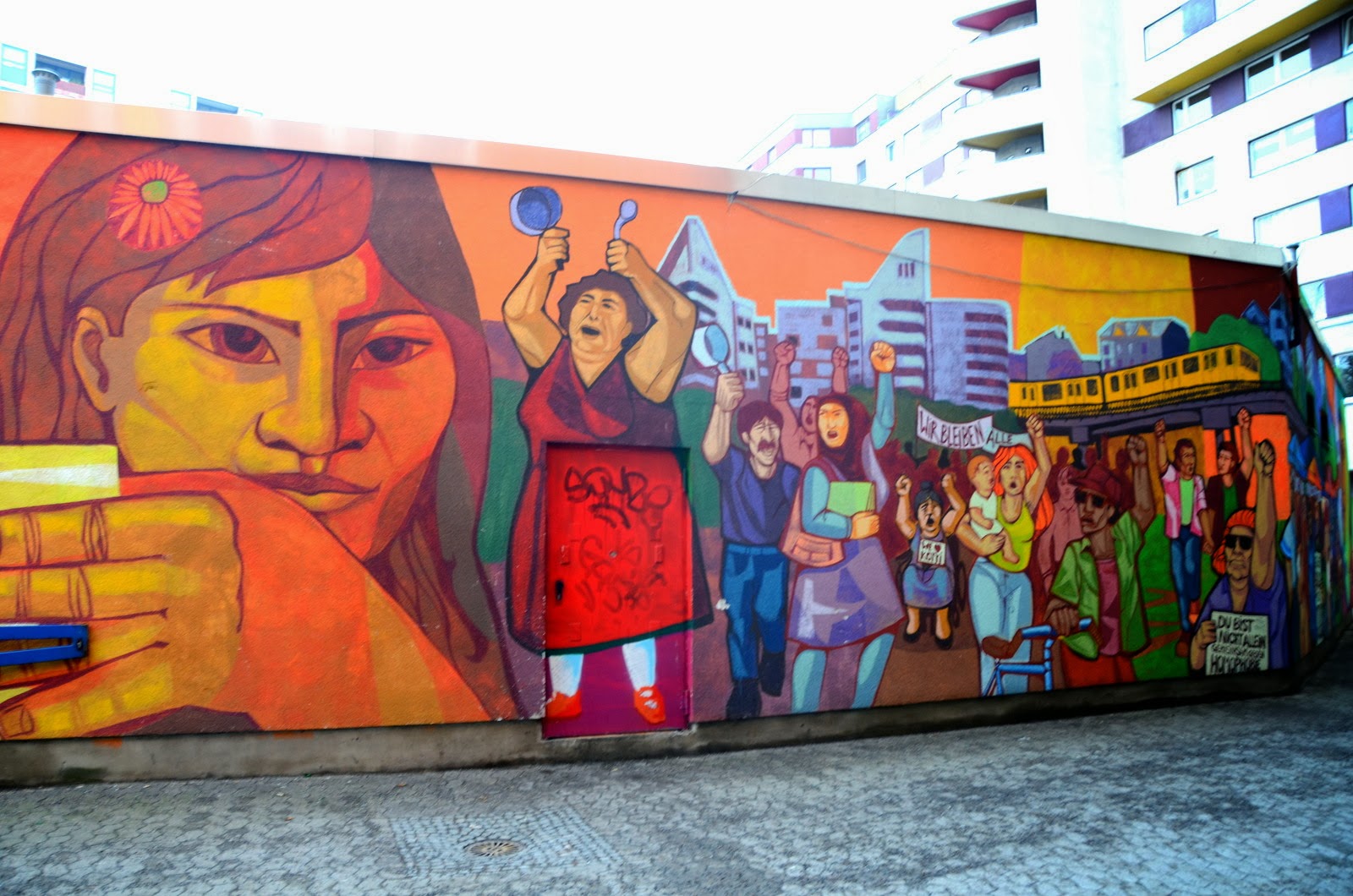 I found this fantastic mural near Kottbusser Tur (aka Kotti) in Kreuzberg. This area of town has been traditionally inhabited by working class people and immigrants, however things have started to change in recent times and many fear gentrification. I love the way this mural depicts different types of people who live in this area coming together to fight to keep their neighborhood the way it is. Unfortunately, I don't have any additional information on the artist, but I hope you enjoy this piece as much as I do! For more murals, take a look at Monday Mural.
Posted by Halcyon at 3/03/2014 05:29:00 PM 13 comments: 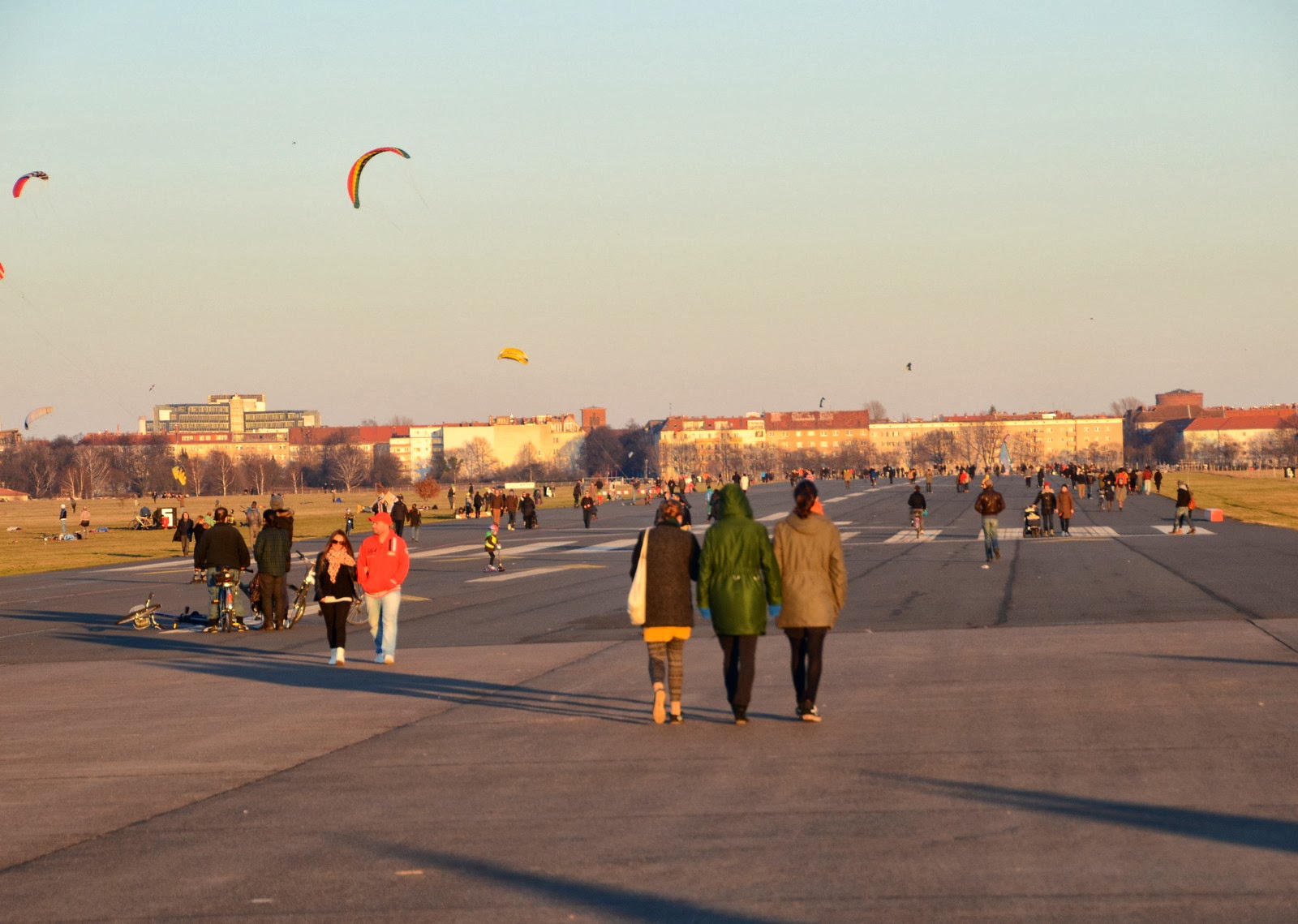 Spring is here! Temperatures have been rising here in Berlin and the skies are blue, let's hope things stay that way. This shot is not exactly a "street" scene, this was actually taken on the old takeoff/landing strip at the Templehof Airport. The airport officially closed down a few years ago and there has been much debate about what to do with the land and the buildings. In the meantime, it has become a popular weekend spot to sly kites, ride bikes, rollerblade or just peoplewatch, and I hope things will stay this way. 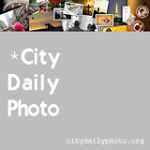 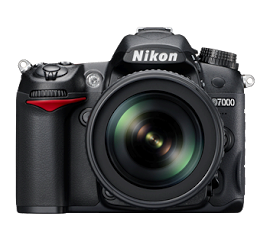